Confocal microscopy, most frequently confocal laser scanning microscopy (CLSM) or laser confocal scanning microscopy (LCSM), is an optical imaging technique for increasing optical resolution and contrast of a micrograph by means of using a spatial pinhole to block out-of-focus light in image formation.[1] Capturing multiple two-dimensional images at different depths in a sample enables the reconstruction of three-dimensional structures (a process known as optical sectioning) within an object. 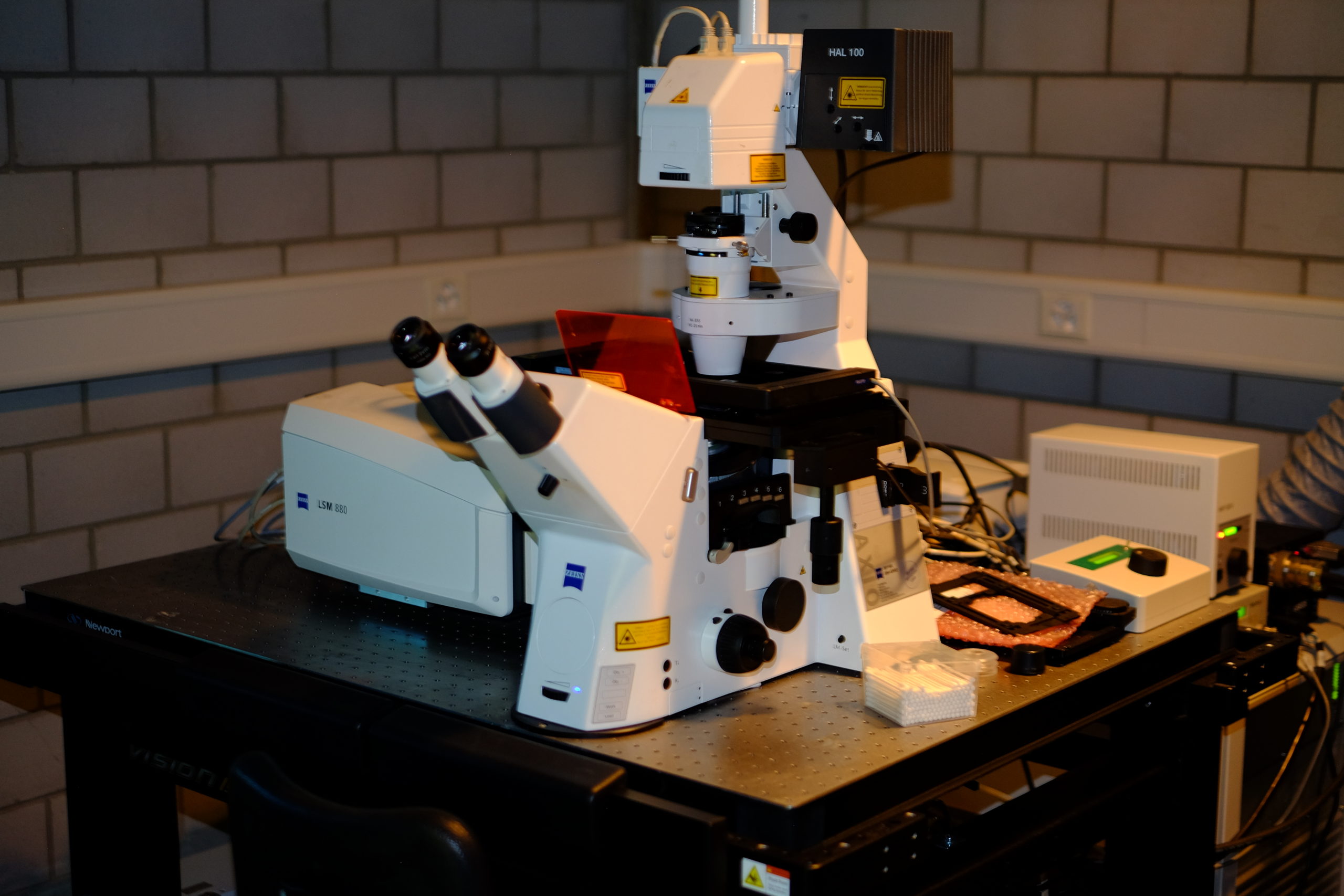 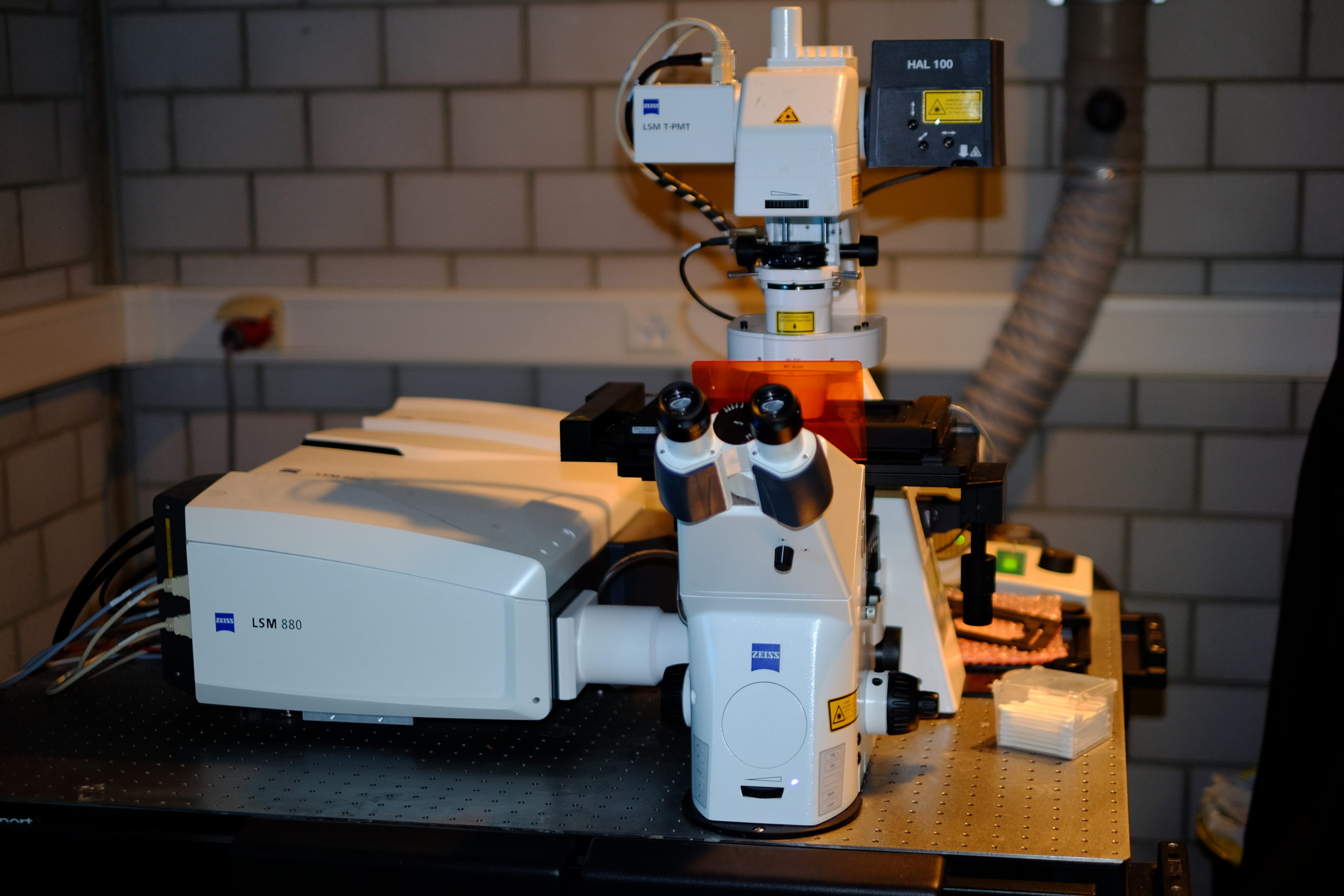 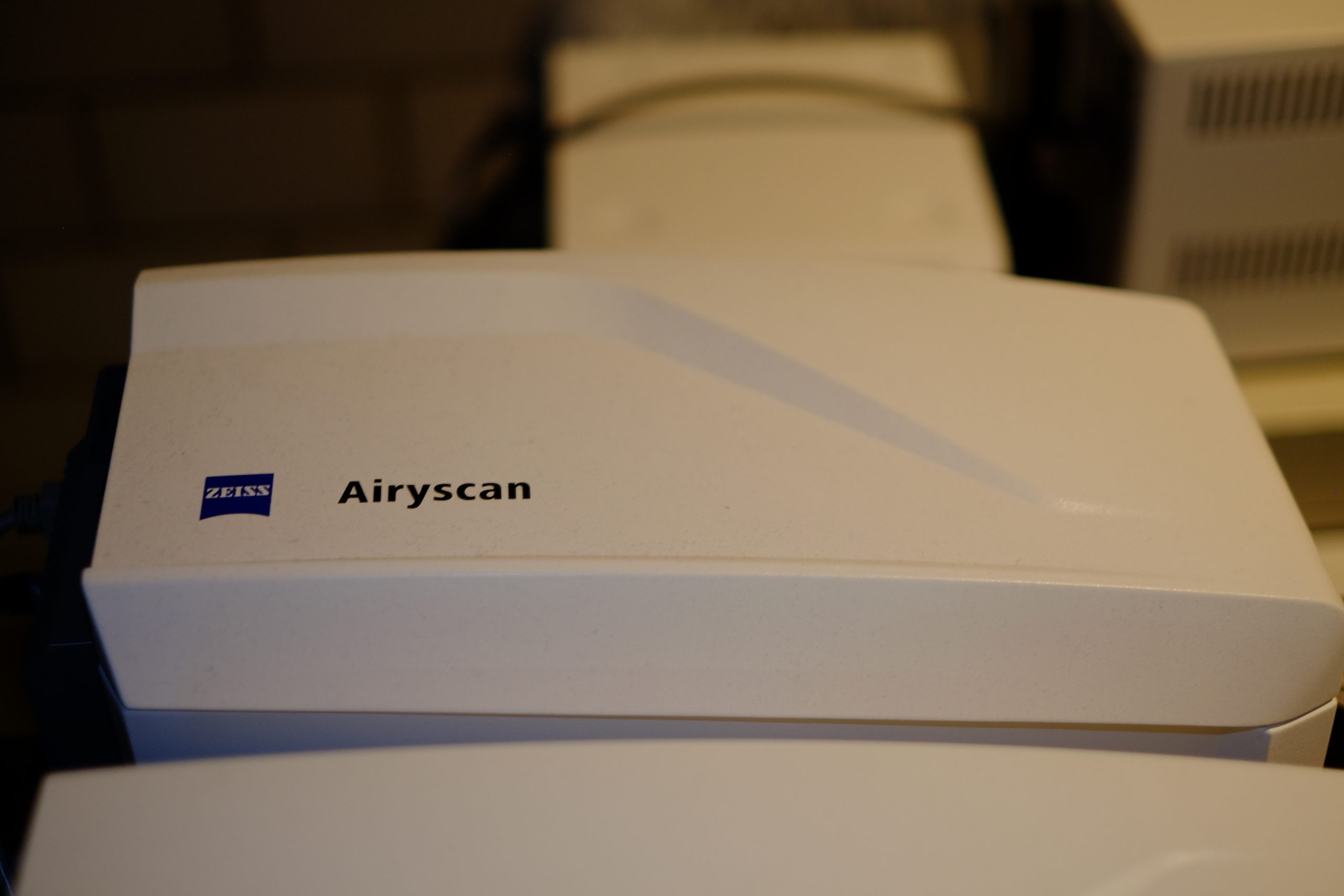 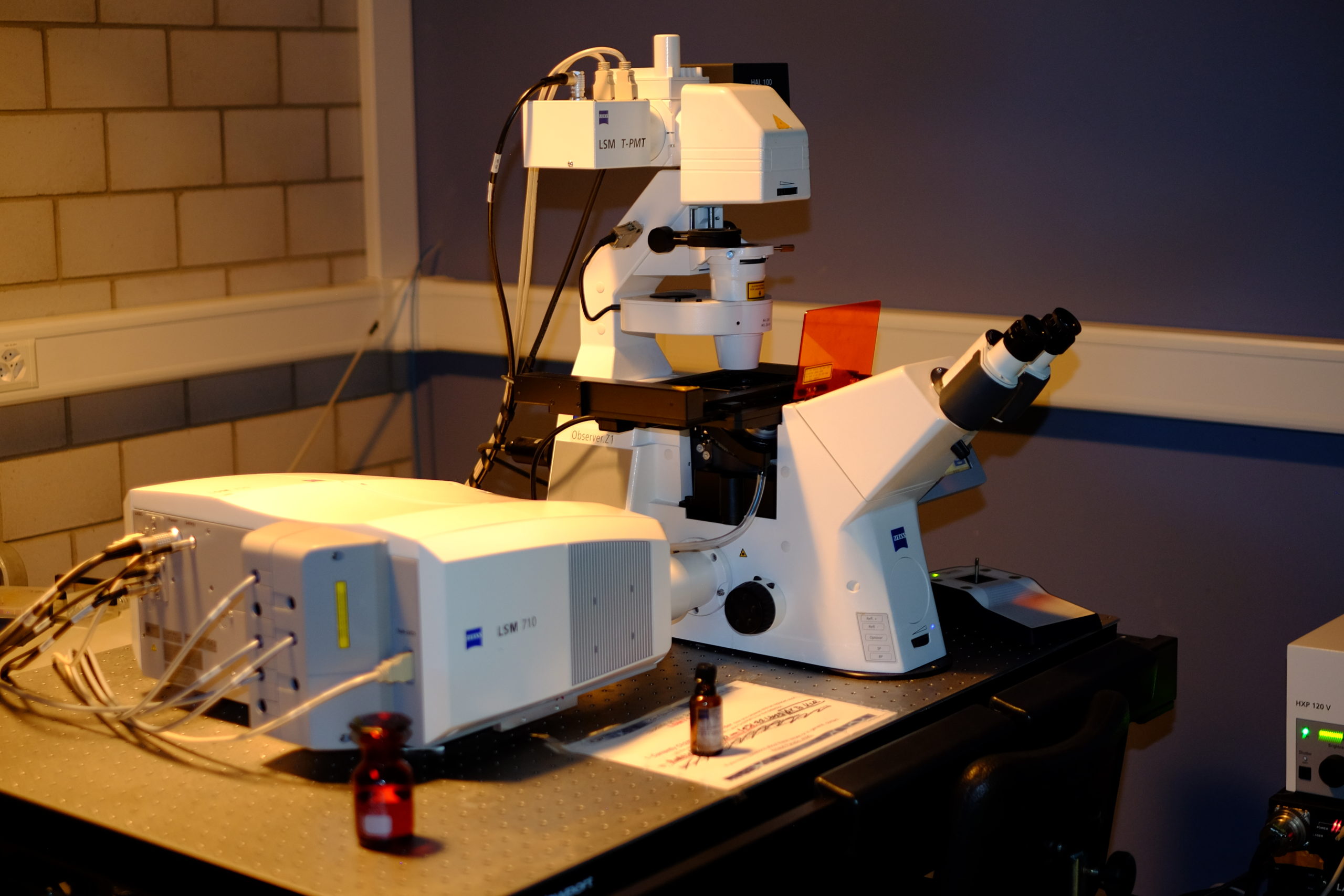 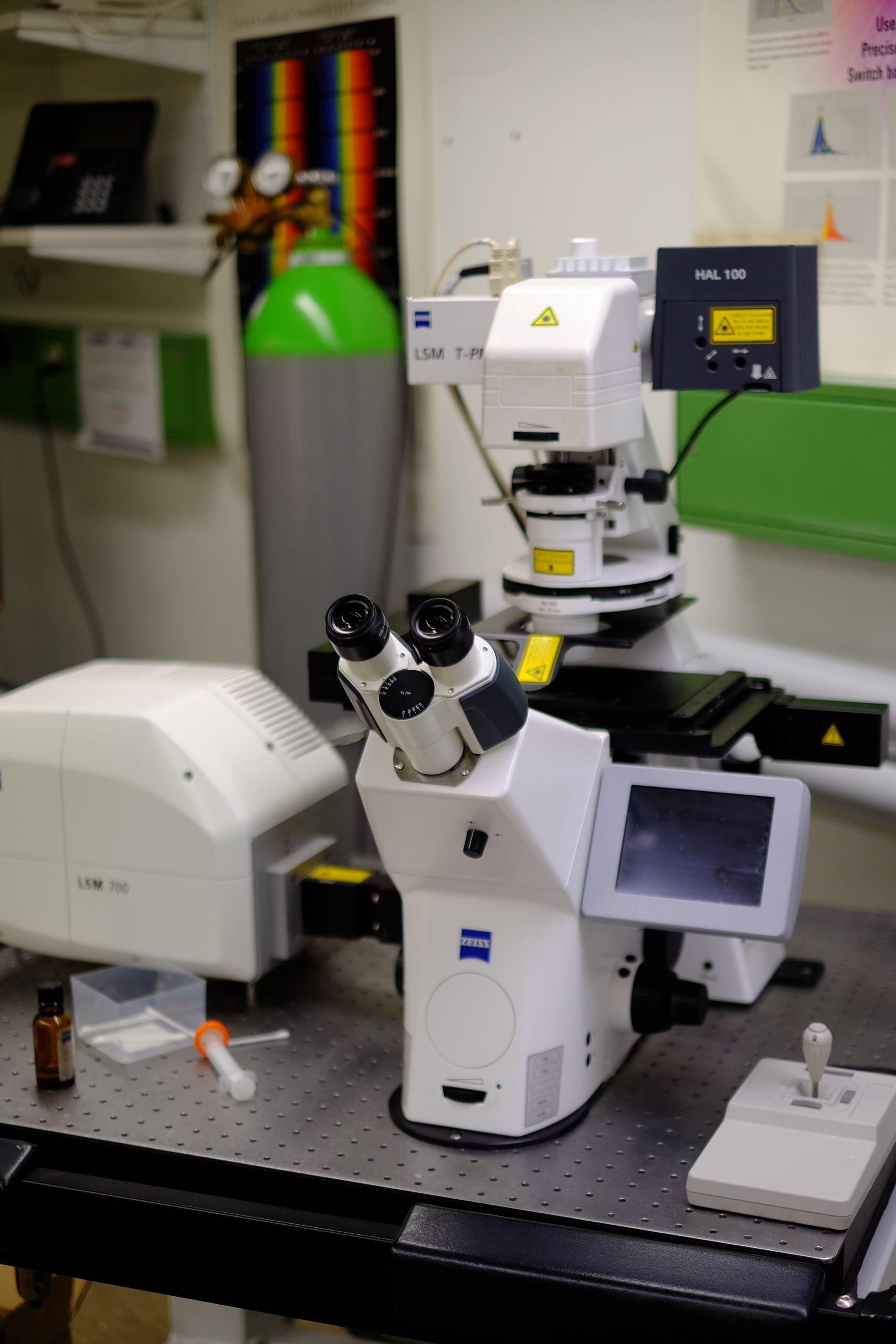 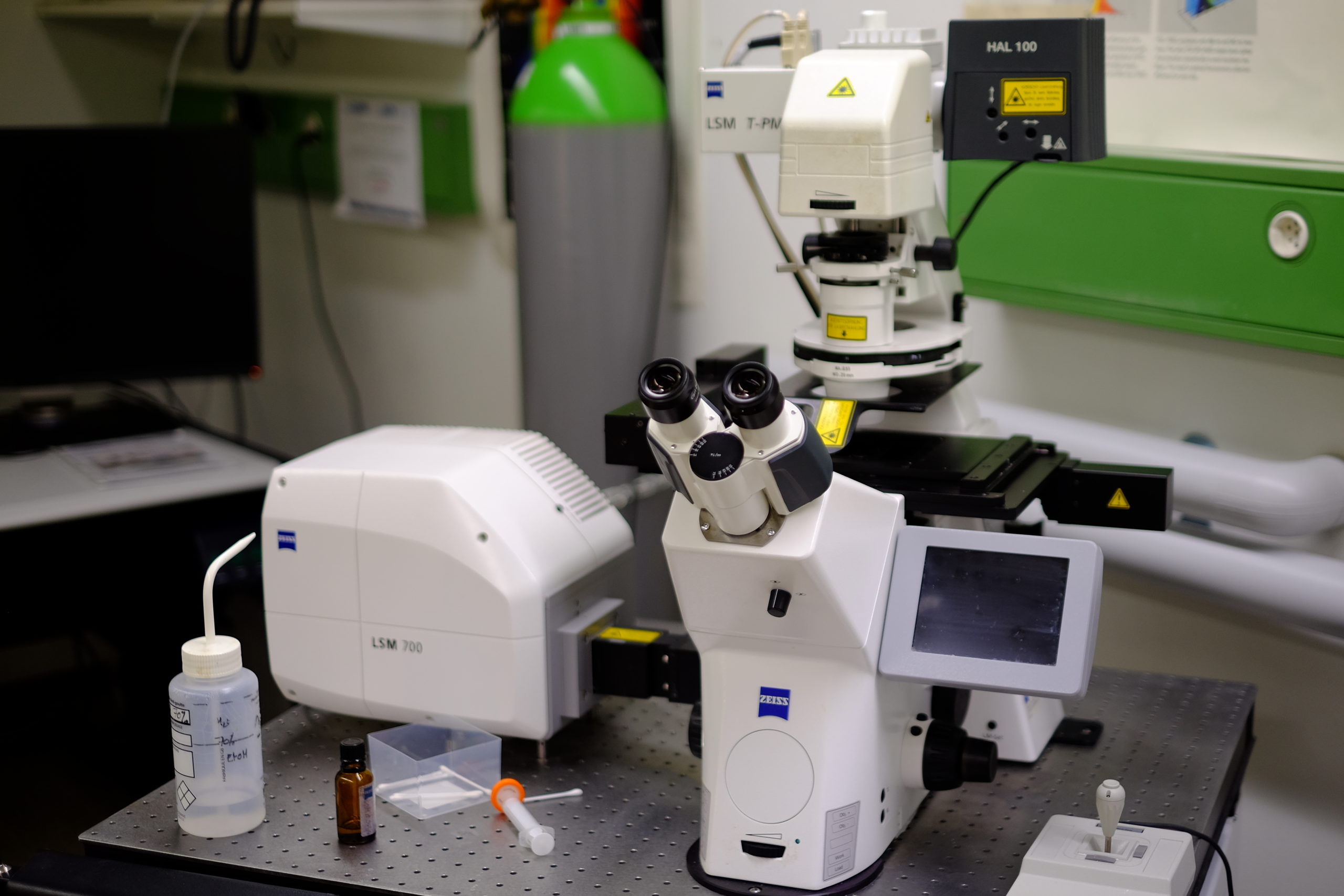 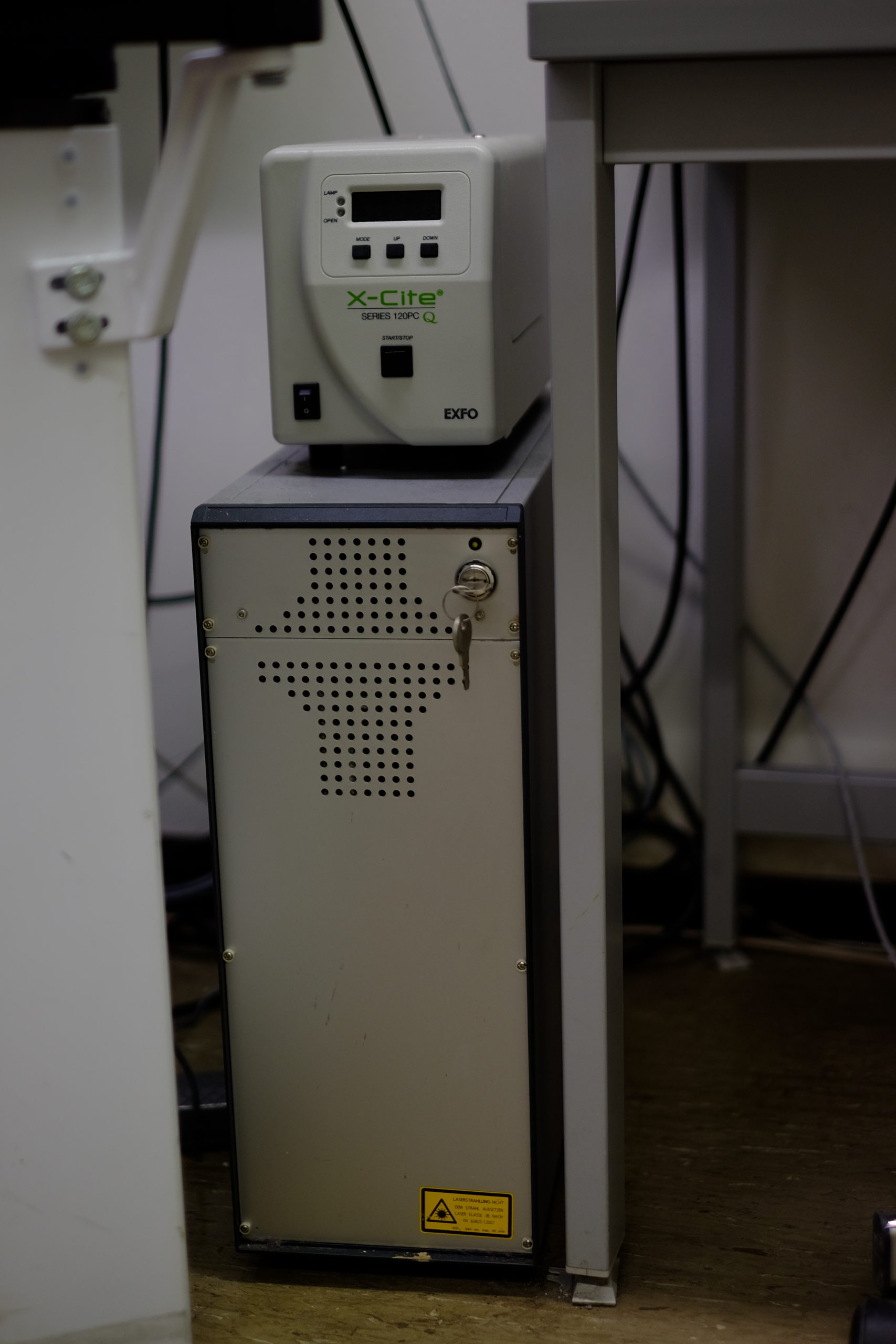 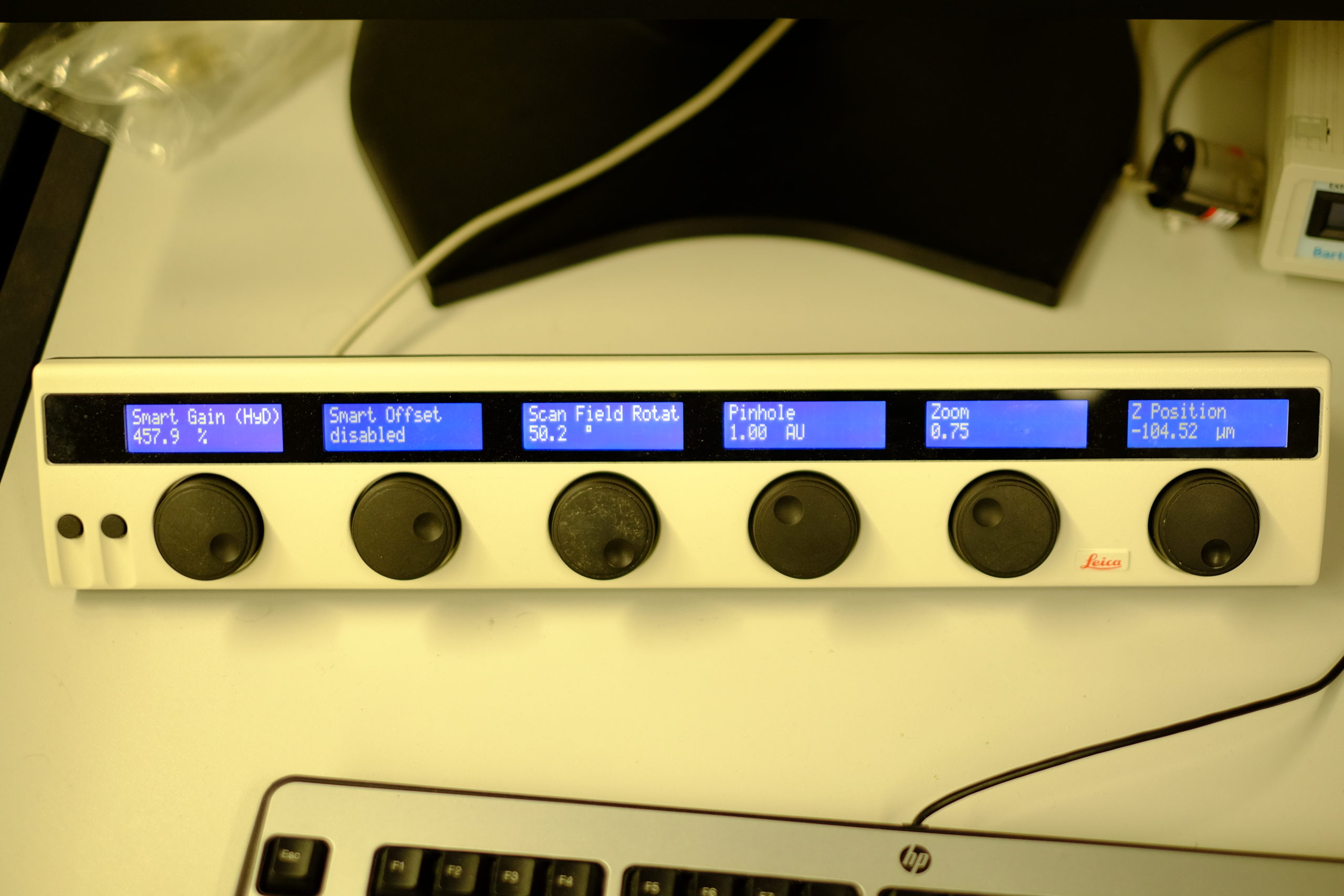 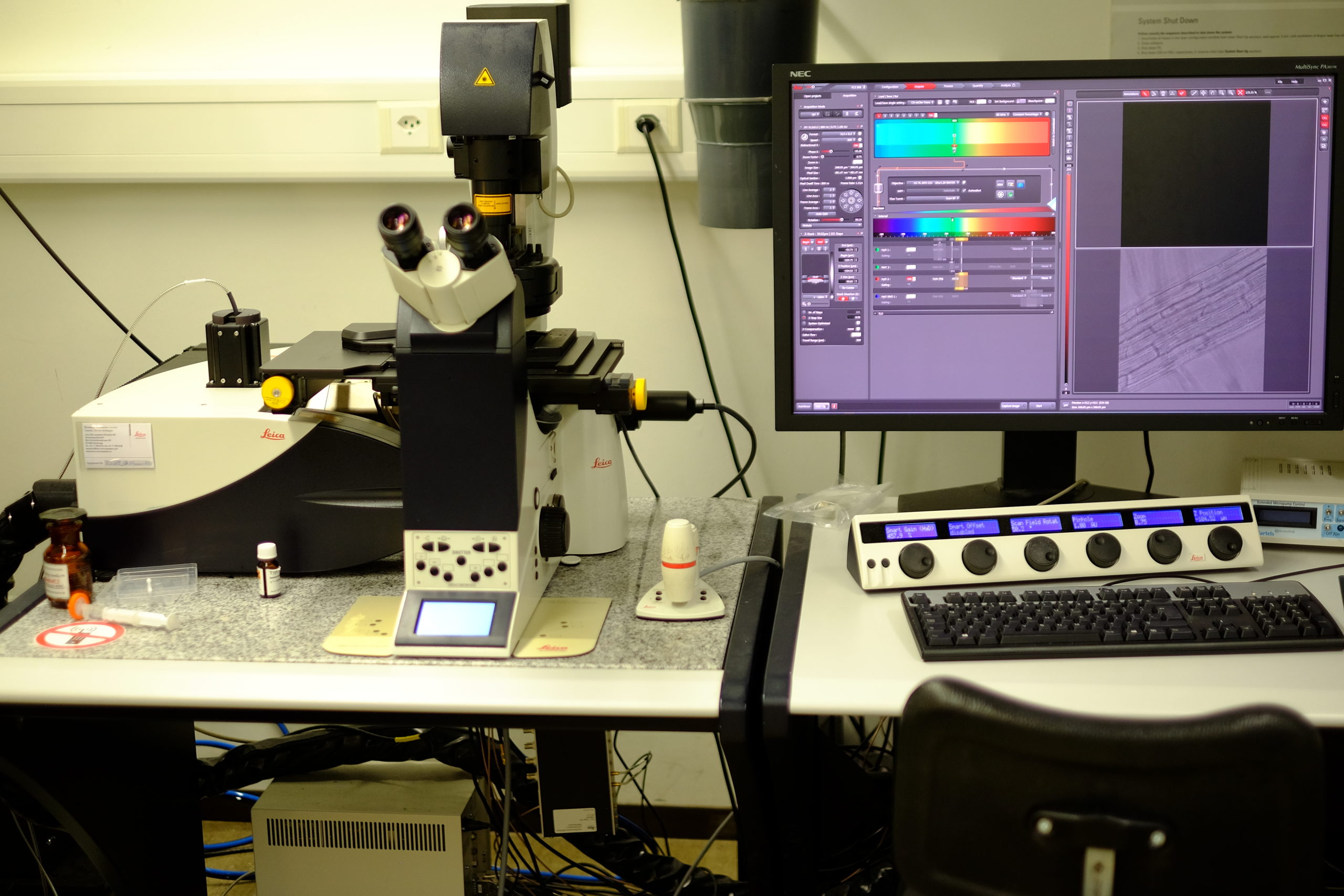 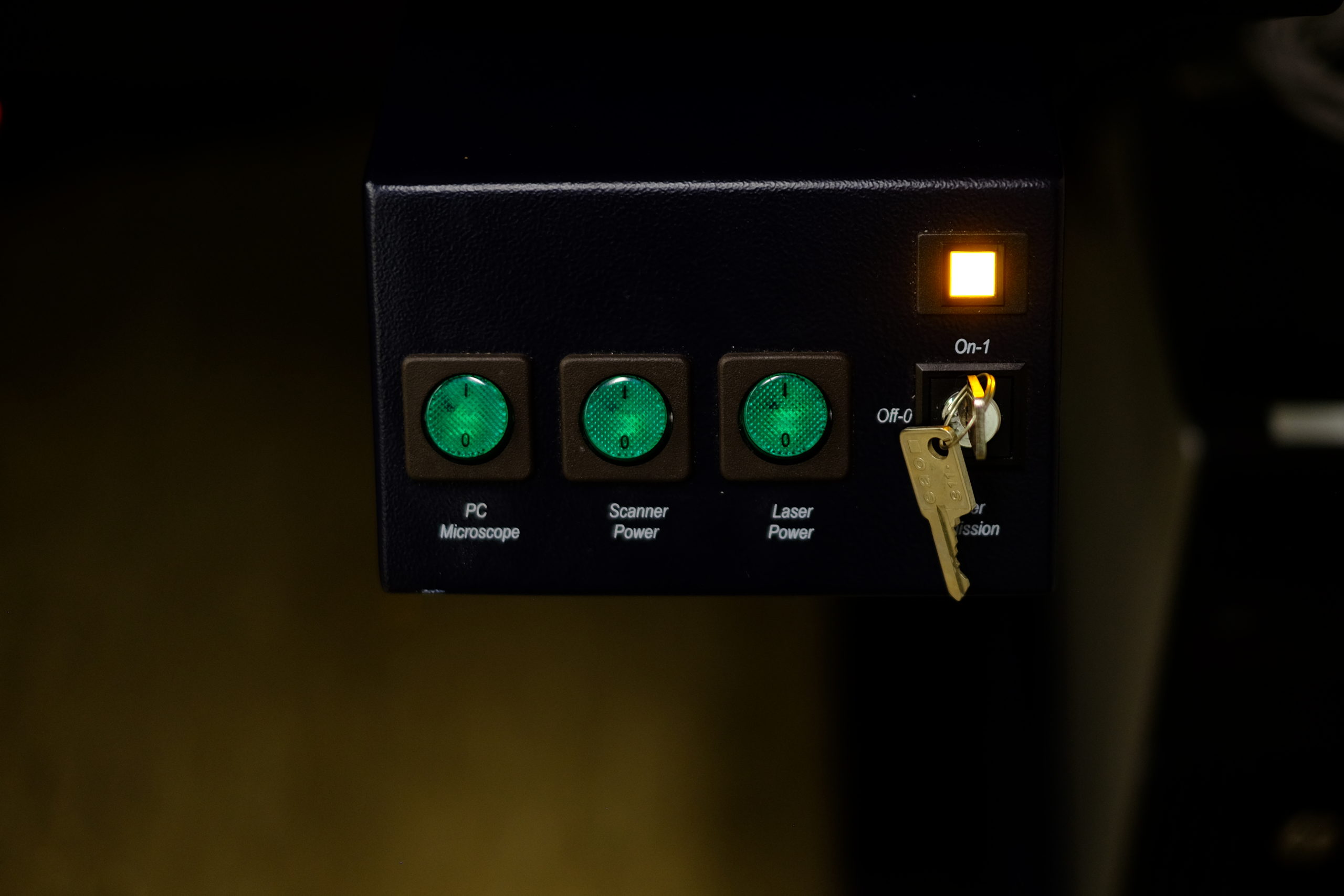 Two-photon excitation microscopy is a fluorescence imaging technique that allows imaging of living tissue up to about one millimeter in depth. It differs from traditional fluorescence microscopy, in which the excitation wavelength is shorter than the emission wavelength, as the wavelengths of the two exciting photons are longer than the wavelength of the resulting emitted light. Two-photon excitation microscopy typically uses near-infrared excitation light which can also excite fluorescent dyes. However, for each excitation, two photons of infrared light are absorbed. Using infrared light minimizes scattering in the tissue. Due to the multiphoton absorption, the background signal is strongly suppressed. Both effects lead to an increased penetration depth for these microscopes. Two-photon excitation can be a superior alternative to confocal microscopy due to its deeper tissue penetration, efficient light detection, and reduced photobleaching.[1][2] 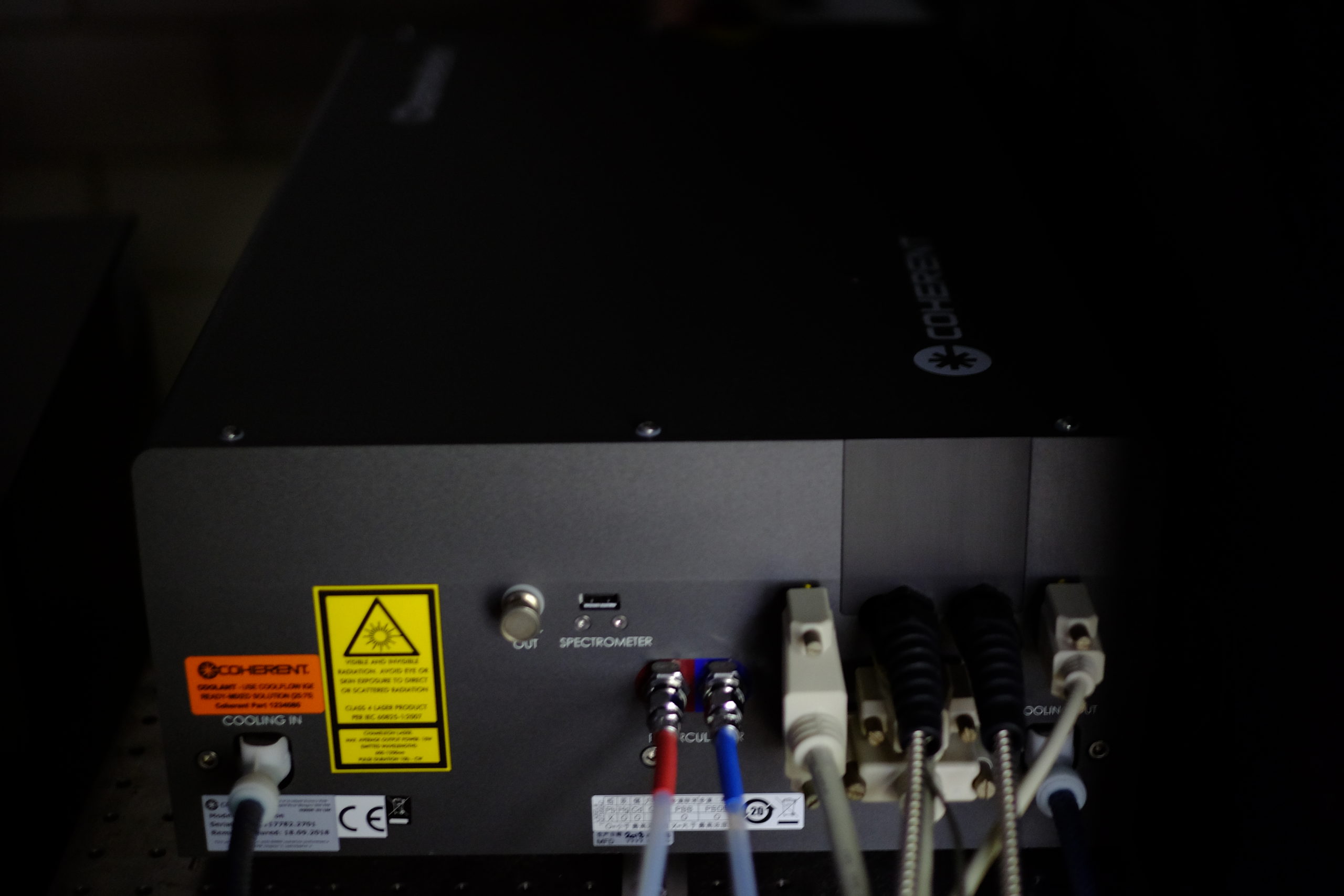 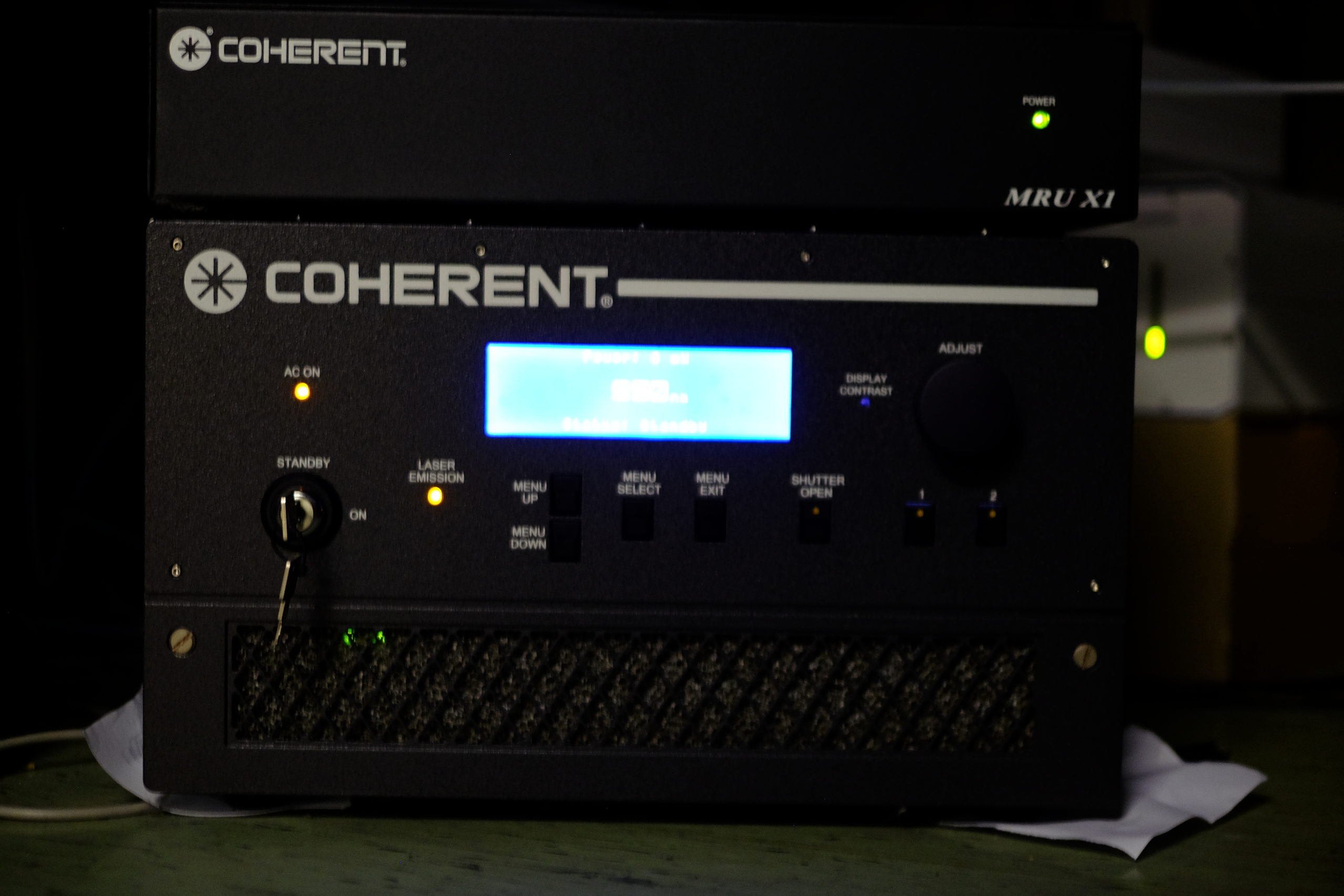 Spinning-disk (Nipkow disk) confocal microscopes use a series of moving pinholes on a disc to scan spots of light. Since a series of pinholes scans an area in parallel, each pinhole is allowed to hover over a specific area for a longer amount of time thereby reducing the excitation energy needed to illuminate a sample when compared to laser scanning microscopes. Decreased excitation energy reduces phototoxicity and photobleaching of a sample often making it the preferred system for imaging live cells or organisms. 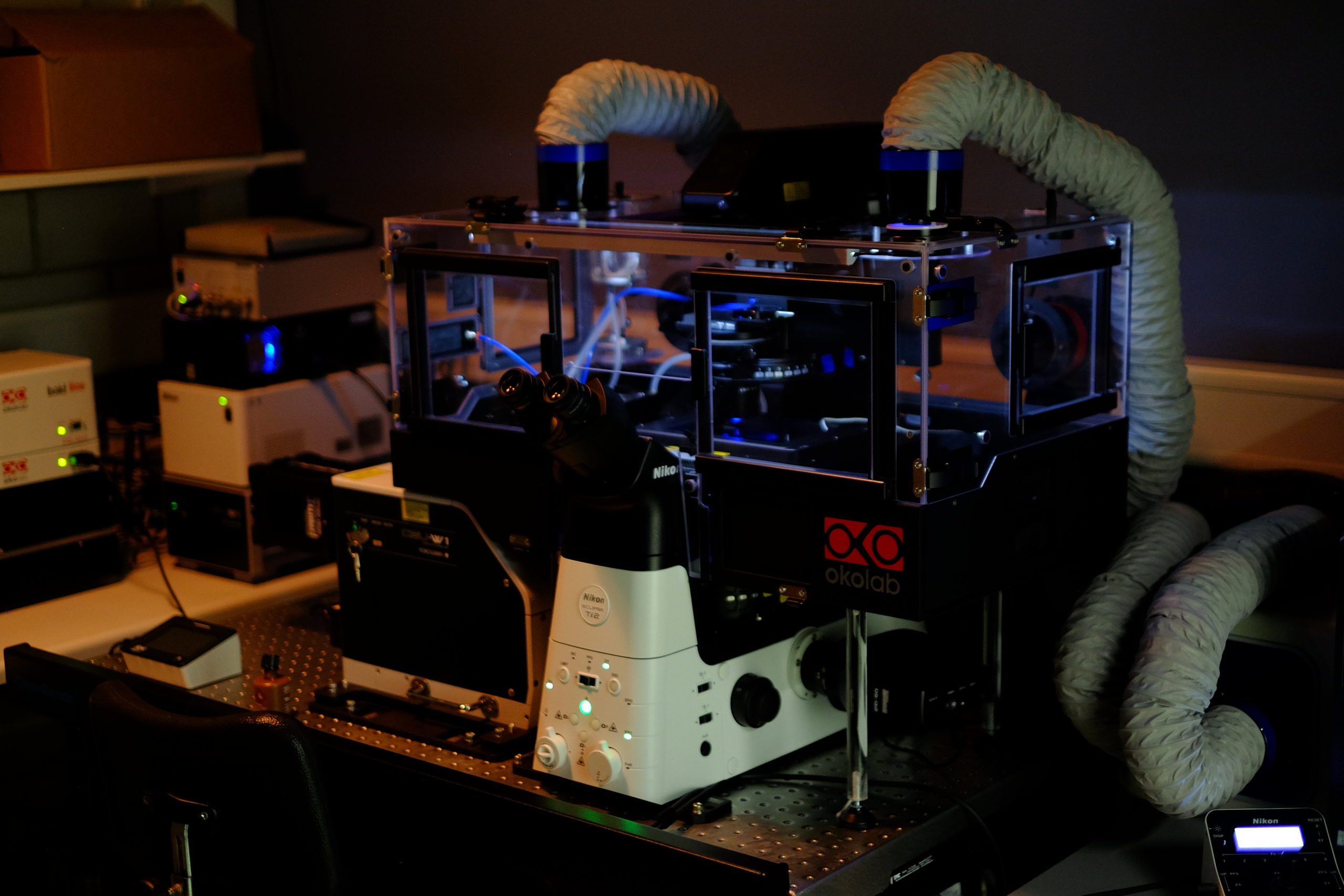 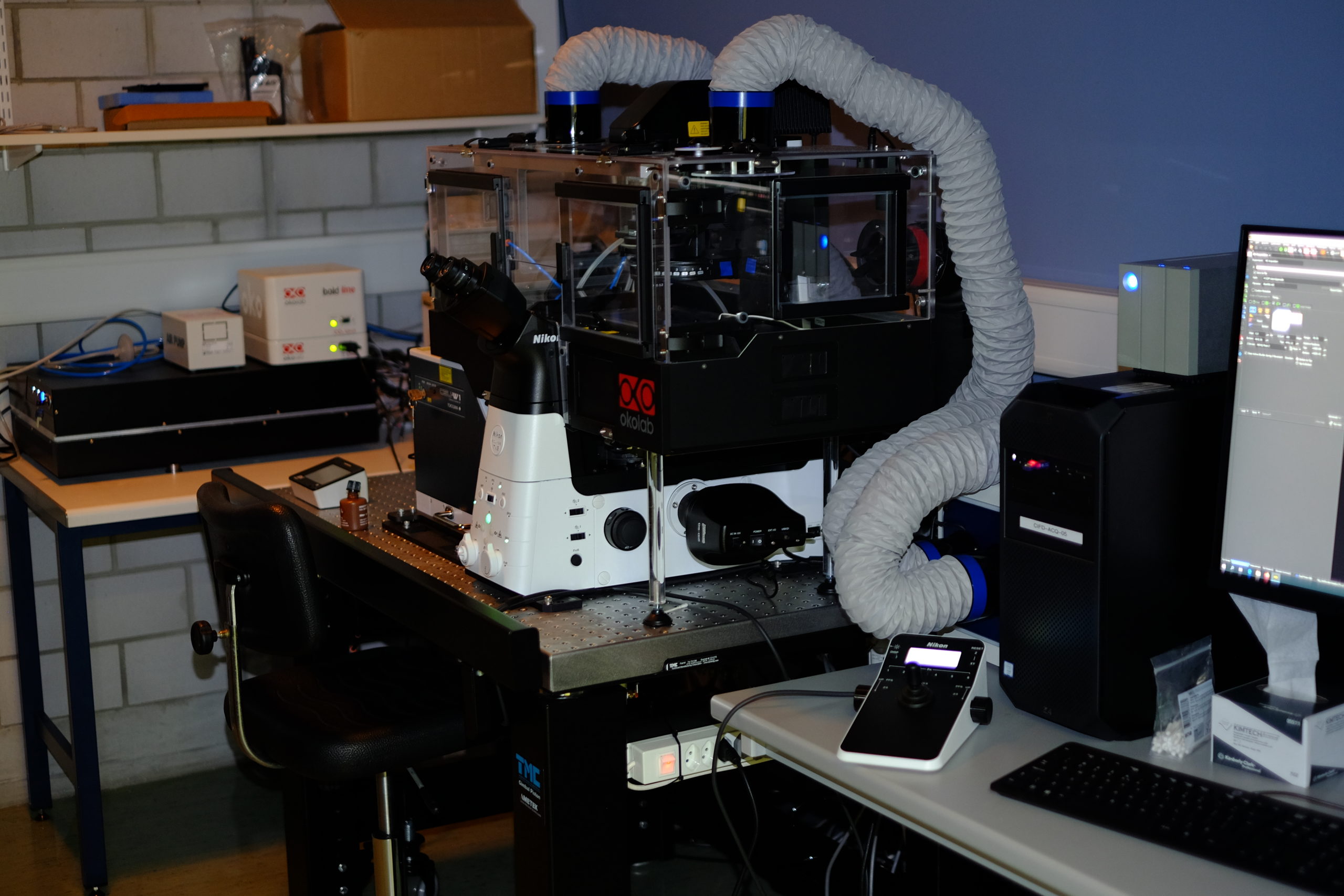 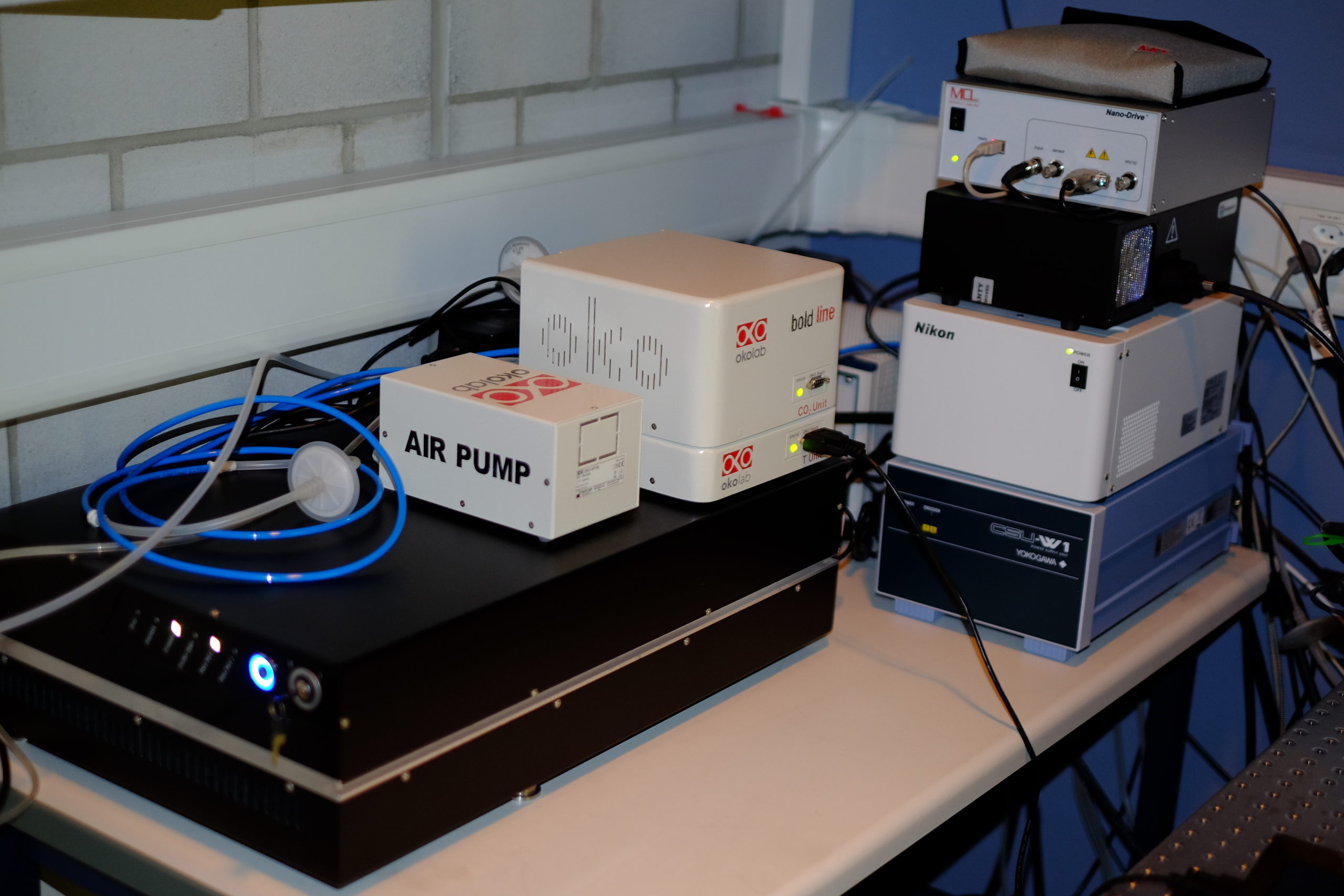 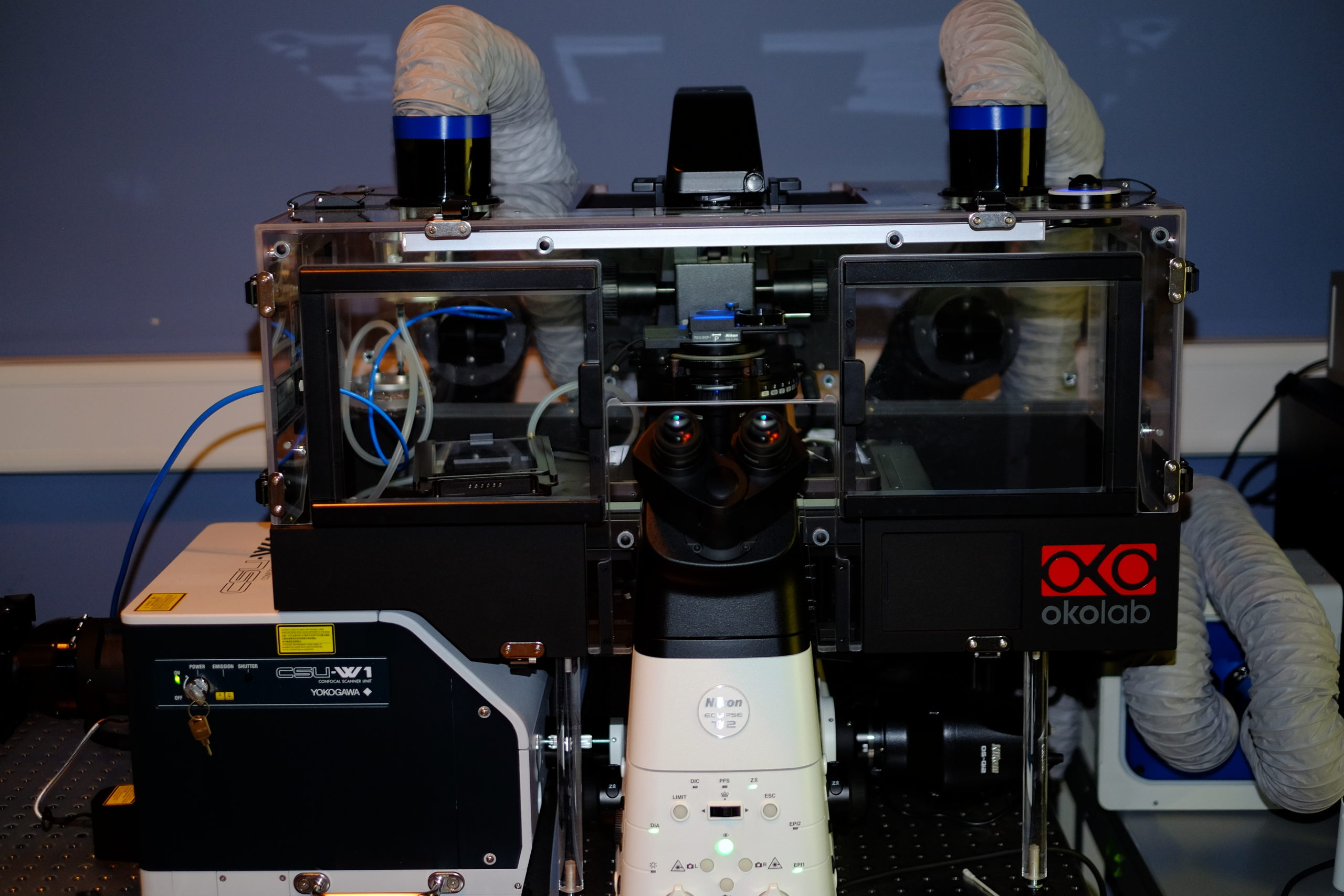 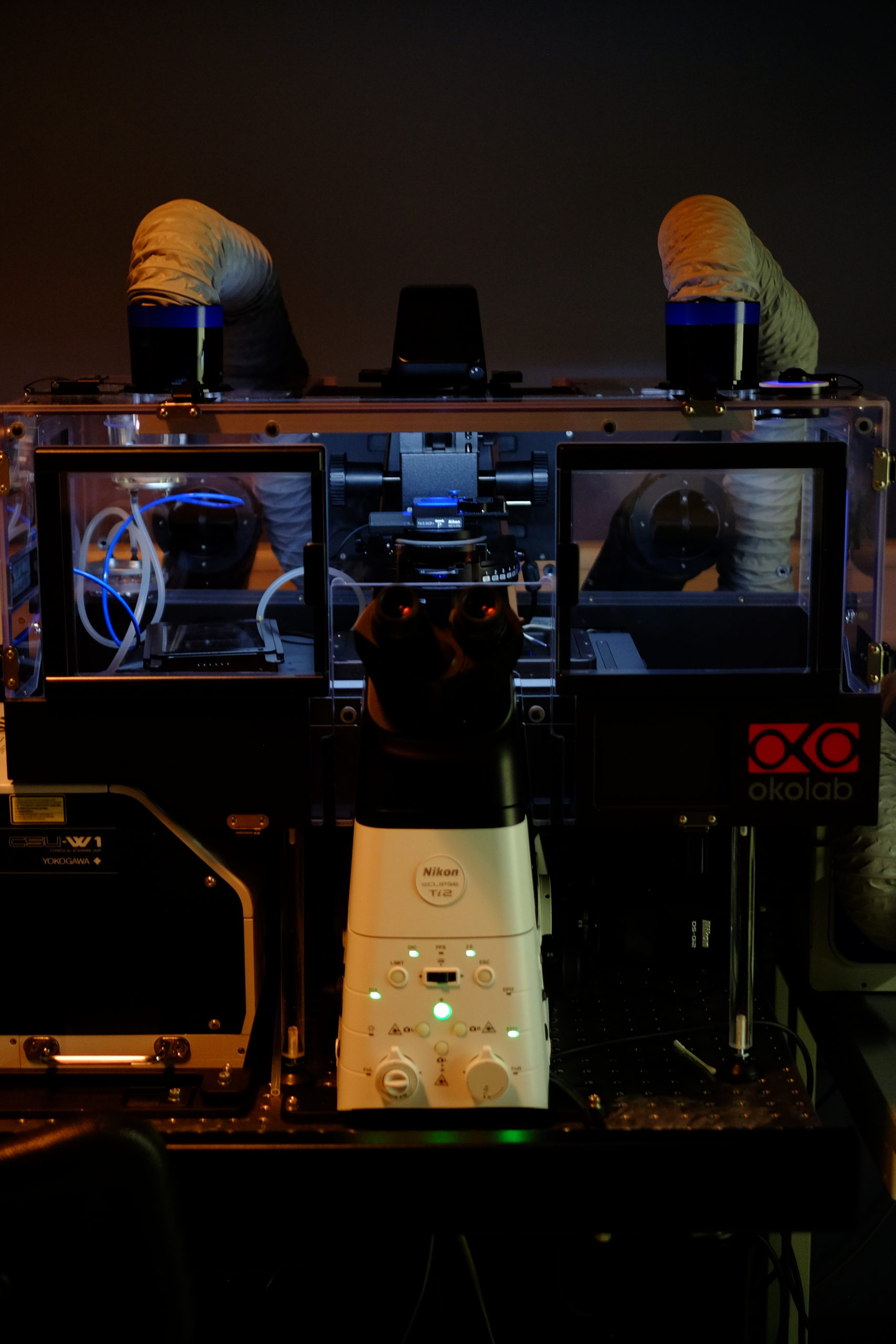 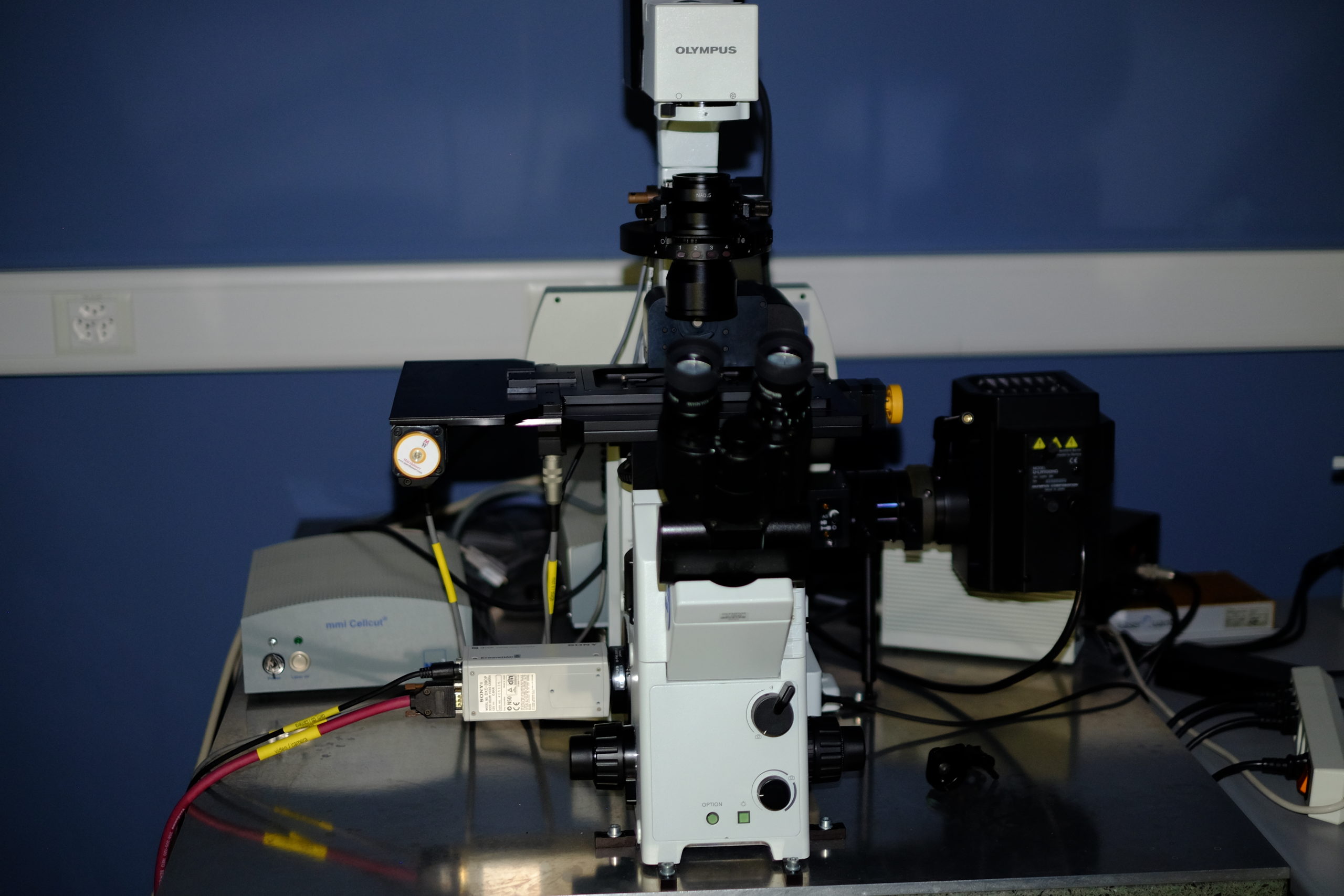 The majority of fluorescence microscopes, especially those used in the life sciences, are of the epifluorescence design shown in the diagram. Light of the excitation wavelength illuminates the specimen through the objective lens. The fluorescence emitted by the specimen is focused to the detector by the same objective that is used for the excitation which for greater resolution will need objective lens with higher numerical aperture. Since most of the excitation light is transmitted through the specimen, only reflected excitatory light reaches the objective together with the emitted light and the epifluorescence method therefore gives a high signal-to-noise ratio. The dichroic beamsplitter acts as a wavelength specific filter, transmitting fluoresced light through to the eyepiece or detector, but reflecting any remaining excitation light back towards the source.

The stereo, stereoscopic or dissecting microscope is an optical microscope variant designed for low magnification observation of a sample, typically using light reflected from the surface of an object rather than transmitted through it. The instrument uses two separate optical paths with two objectives and eyepieces to provide slightly different viewing angles to the left and right eyes. This arrangement produces a three-dimensional visualization of the sample being examined.[1] Stereomicroscopy overlaps macrophotography for recording and examining solid samples with complex surface topography, where a three-dimensional view is needed for analyzing the detail. 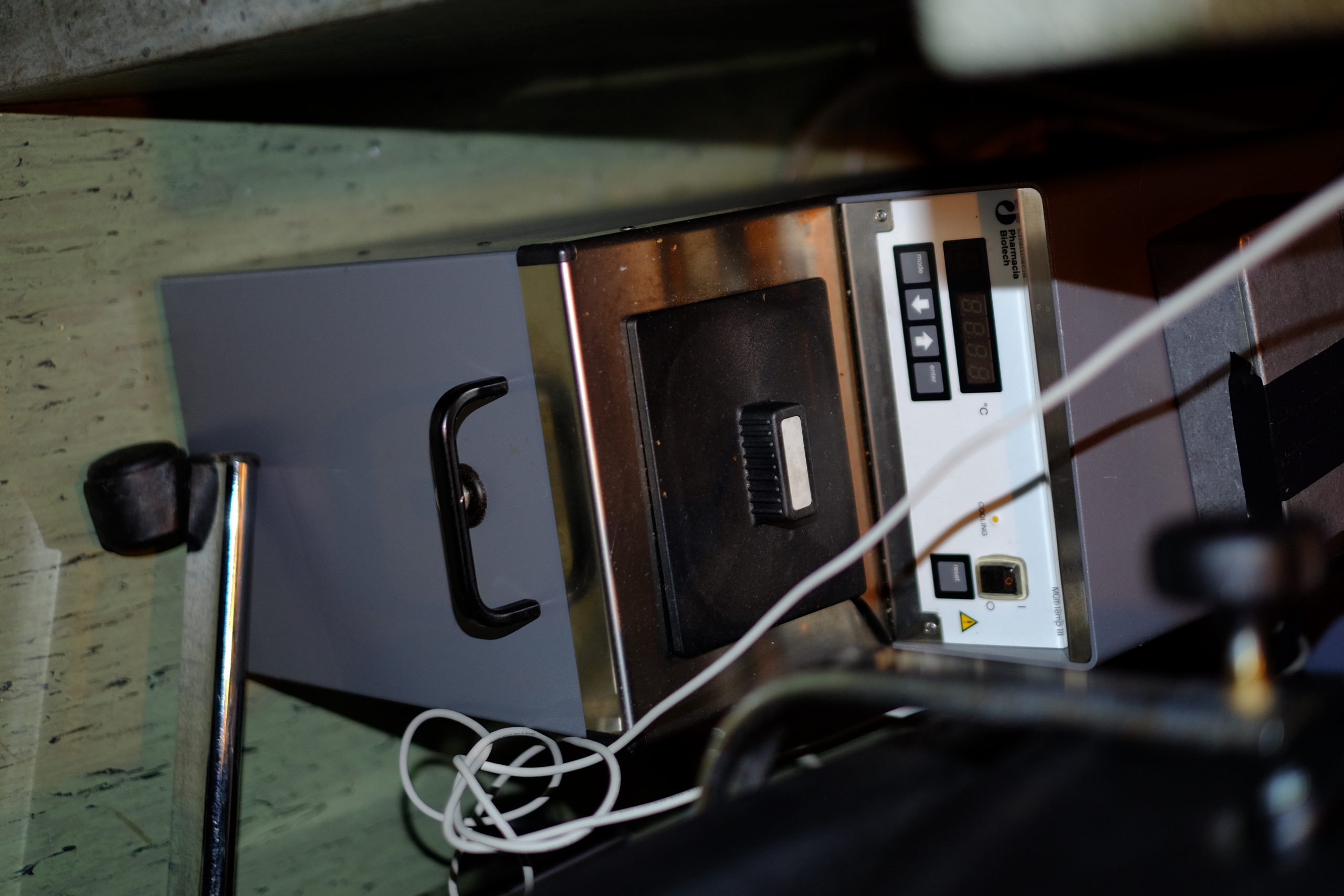 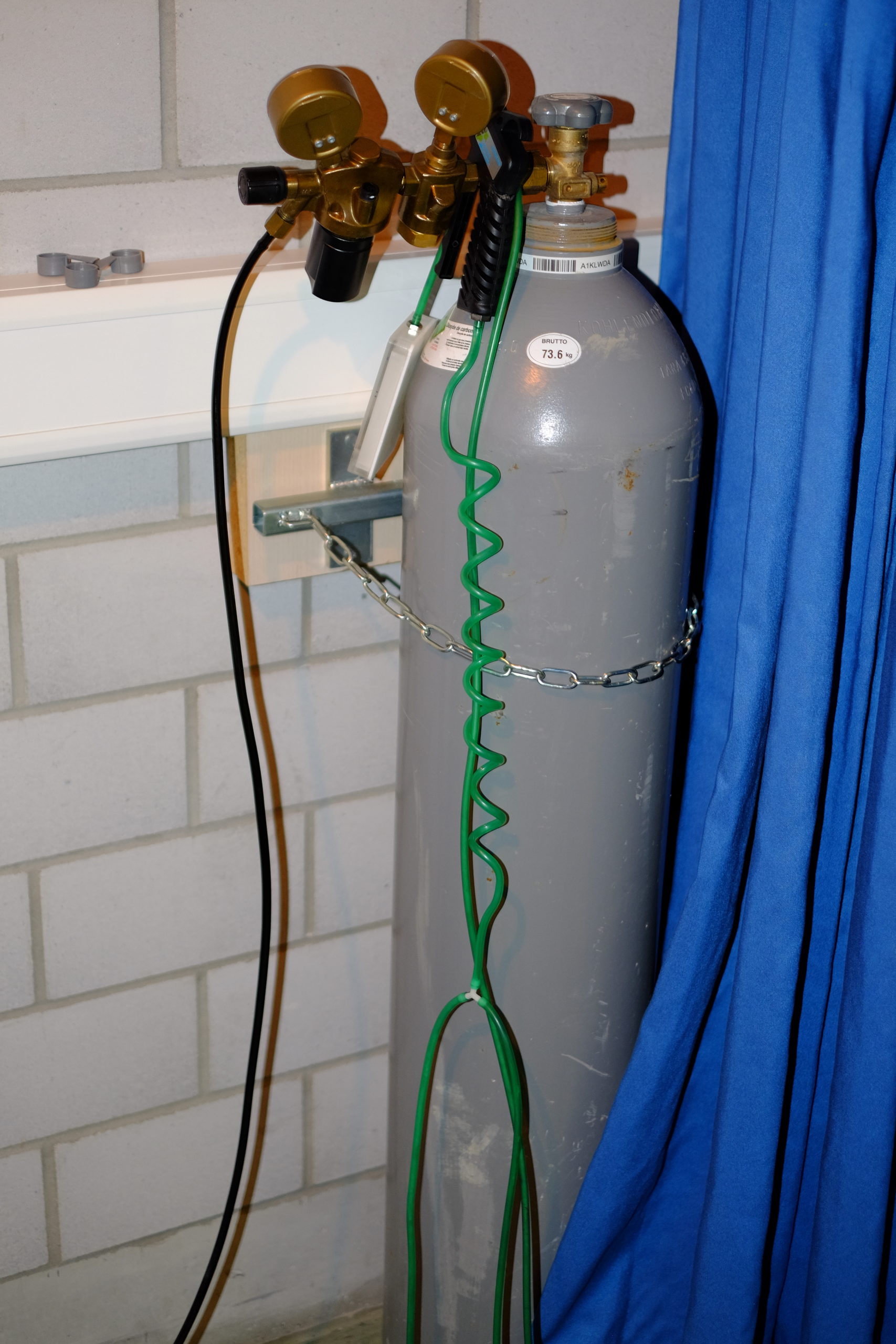 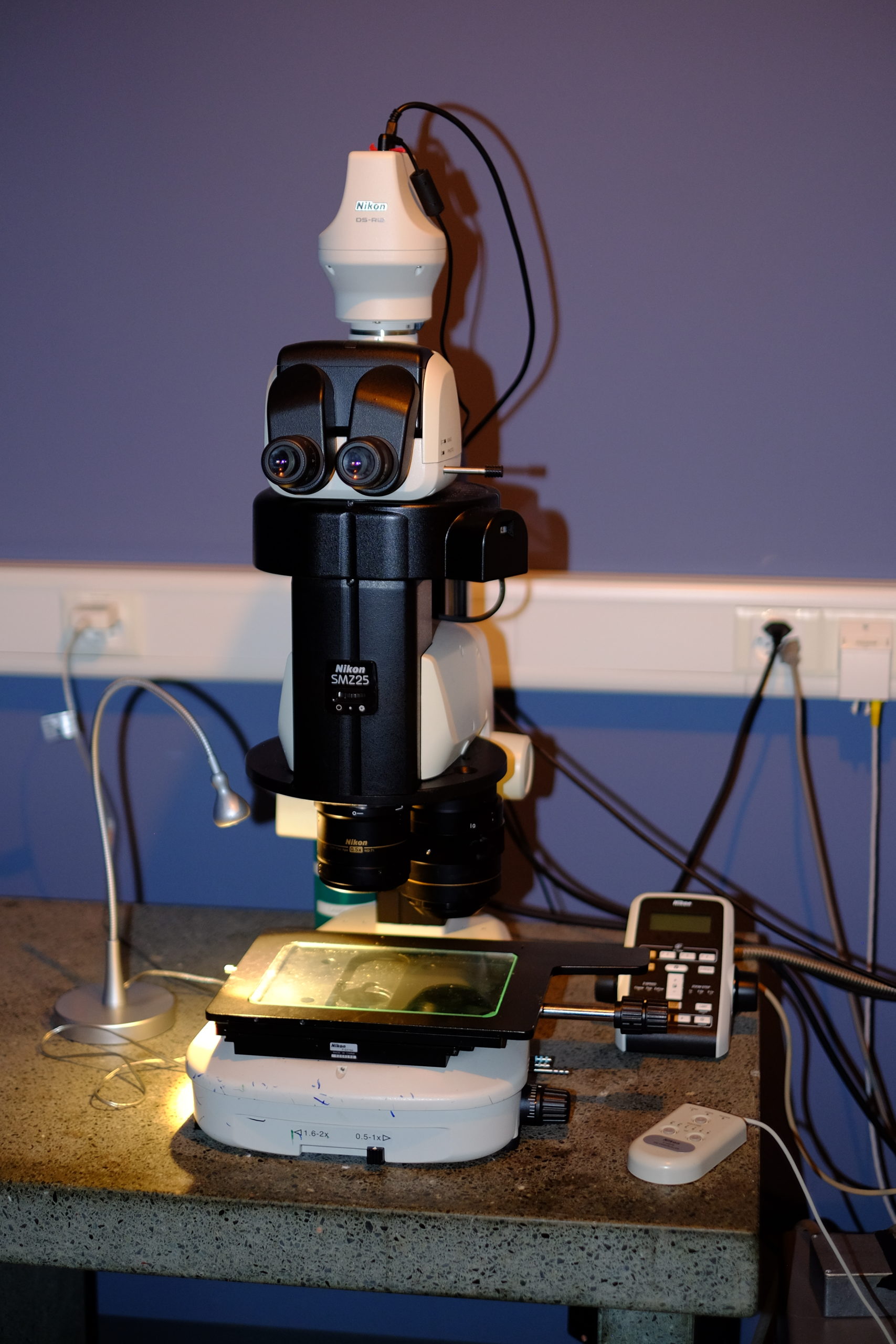